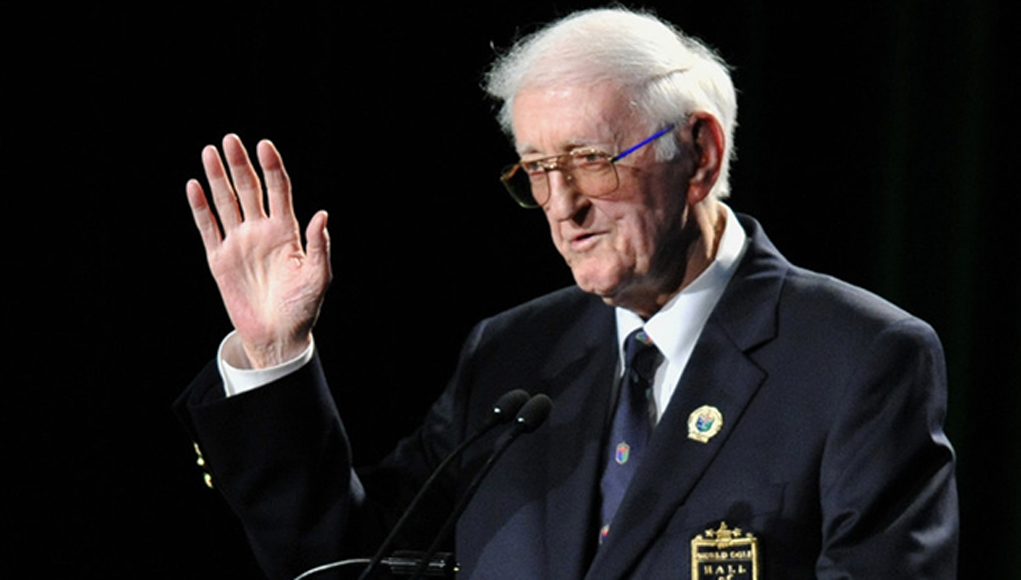 Dan Jenkins, the sports writing great and best-selling author whose career covered Ben Hogan to Tiger Woods, began with Western Union and ended with Twitter, has died. He was 90.

“The message on my tombstone will be, ‘I knew this would happen,'” Jenkins always said, exemplifying the trenchant humor he brought to the 232 major championships he attended, starting with the 1941 U.S. Open at Colonial as a 12-year-old in his hometown.

Jenkins began his career at The Fort Worth Press and rose to stardom at Sports Illustrated with his two loves, college football and golf. He also wrote for Playboy and joined Golf Digest in 1985. Jenkins continued to write books, including a memoir called, “His Ownself.” His best-sellers included “Semi-Tough,” ”Baja Oklahoma” and “Dead Solid Perfect.”

Jenkins covered his first major at the 1951 Masters, won by his beloved Hogan. Starting with the 1969 PGA Championship, he covered 179 consecutive majors. The streak ended when his health kept him from going to Royal Liverpool for the British Open in 2014.

.@PGA President @suzywhaley: “Dan Jenkins constantly reminded us not to take ourselves too seriously, lest we forget to stop and smell the roses in life. We were fortunate that Dan loved golf and became a link to a golden age in the game." (1/2)

"Through his work, Dan brought to life many of golf’s legendary players while also sharing his appreciation for PGA Professionals who daily work to grow the game. Dan kept us on our toes with his wit & we will dearly miss him. Our thoughts and prayers are with his family.” (2/2)

Jenkins became only the third golf writer to be inducted into the World Golf Hall of Fame in 2012, following Bernard Darwin and Herbert Warren Wind.

When former PGA Tour Commissioner Tim Finchem listed all of Jenkins’ achievements for the World Golf Hall of Fame, including his numerous writing awards, Jenkins replied: “You left out my cure for polio.”

Jenkins looked at all the people who had been enshrined and concluded that “I have known 95 of these people when they were living. I’ve written stories about 73 of them. I’ve had cocktails and drinks with 47 of them. And I played golf with 24 of them.”

He was most famously linked with Hogan, who he maintains was the best shot maker he ever saw. He often played golf with Hogan, and Jenkins used to tell of the time Hogan offered to work with him on his game if he wanted to try to compete in the U.S. Amateur.

Jenkins said he was flattered but turned him down because all he wanted to be was a sports writer.

He always thought Hogan’s win at Oakland Hills in the 1951 U.S. Open was as good as he has seen anyone play. Hogan shot 67 in the final round and later said that he brought “the monster” to its knees.

“Oakland Hills looked more like a penitentiary than a golf course,” Jenkins said.

He listed that among his top three moments in golf, along with Jack Nicklaus winning his sixth Masters at age 46 and the 1960 U.S. Open, regarded by many as being one of the greatest days in the history of the championship. Arnold Palmer shot 65 in the final round to beat Hogan, the aging star, and Nicklaus, the emerging star who was still an amateur that day at Cherry Hills.

“I’d never experienced — even as an old, cynical writer — as much excitement as all of us felt that afternoon following that action,” Jenkins said. “There have been so many great moments in golf that you even forget some of them. But that one still stands out. … There have been so many great tournaments that I’ve been privileged to see, and people paid me to go watch, that I’m awfully grateful for it.

“And I’m so happy that I chose the profession I did.”

His writing style was grounded in humor, and he often mocked the players he felt unworthy to win a major — starting with Jack Fleck, who took down Hogan in a playoff at Olympic Club for the 1955 U.S. Open, which remains one of the game’s biggest upsets.

Through all of his writings, though, Jenkins said he never tried to sell out accuracy for a good joke.

“Even though I was making a stab at humor, I don’t think I ever wrote a line I didn’t believe,” Jenkins said. “I tried not to draw too much blood. I tried to rave about all the heroes of the game, and they deserved it. … When something great happens — like when an Arnold Palmer or Jack Nicklaus or Tiger Woods or Ben Hogan happens — you don’t have to be funny, you just have to be accurate.

“When you have to be funny is when you’re on deadline and somebody like Jack Fleck creeps up on you,” he said. “That’s when you have to tap dance, because it doesn’t make any sense. We have more and more of that these days, don’t we?”

Jenkins also is member of the Texas Golf Hall of Fame and the National Sportscasters and Sports Writers Hall of Fame.

He wrote effortlessly, with keen observation, and trusted his instincts. He recalls using Western Union in the 1951 U.S. Open — “They were in charge of the typos,” he once said — and used a typewriter until the late 1990s.

“He always filed clean copy,” his daughter, Washington Post columnist Sally Jenkins, once said. “If a page got sloppy with correction, he would retype the entire page. Because he has grown up writing on a typewriter, he thought cleanly.”

It was at the 2009 PGA Championship at Hazeltine where Jenkins was persuaded to try Twitter. It allowed him to share material that might not make it into a column because Jenkins always believed a good line should not be forced into a story if it didn’t fit the theme.

“At Hazeltine in 1970, there was nothing between the course and downtown. I had to stop and ask a cow which farm we were playing,” he tweeted.

In addition to his daughter, Jenkins is survived by wife June and sons Danny and Marty.

“It is practically a myth-buster that questions the expectation from leaders to be perfect and infallible”, says Pawan Verma in a recent Interview

Political Musings and Journal Entries of a Lazy Author – Sabarna...

Moving Images: Musings and Journal Entries of a Lazy Author –...