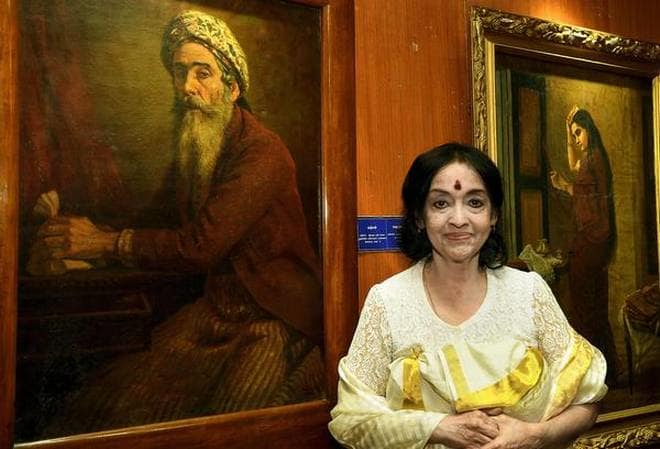 How artist and author Rukmini Varma channelled the words and memories of her ancestor, to tell his story .

When Rukmini Varma chanced upon two books in the early 1960s, during the division of the Kilimanoor palace in then-Travancore, she did not anticipate what they would lead her to. The author and artist of the erstwhile royal family of Travancore, who is also the fourth-generation descendent of the prolific 19th-Century artist Raja Ravi Varma, could see the latter’s own squiggles and notes on them. A few sparse words, sprinkled across the length and breadth of the books, written by the legendary Indian painter himself.

“The moment I saw the words, something kept telling me that this is important. I mulled over them for a long time and realised that Raja Ravi Varma was on a quest — to make his works come alive — which I have called the ‘art of actualisation’,” she said. Thus, the author penned Hidden Truth, a work that encompasses the life of Raja Ravi Varma in a series of anecdotes, that are replete with both fascinating personal details, and a look at his role in the Indian artistic tradition. By picturing these words with the stories she had heard from her grandmother Maharani Sethu Lakshmi Bayi, the author traced Raja Ravi Varma’s journey from a little boy holding a piece of charcoal, waiting eagerly to scribble on the wall, to a pioneer of classical realism in India.

The author, an artist herself, was in the city for a talk, ‘The Timeless Art of Ravi Varma’, hosted by the Government Museum and The Raja Ravi Varma Heritage Foundation. Here, she was met with a packed hall of artists and admirers alike. 150 years after her ancestor passed on, his techniques and usage of colours — which laid the foundation of classical realism — are still discussed vehemently.

To a question of Ravi Varma’s connect to the city, Varma was quick to respond with a bit of trivia: “The first precious box of paints he bought was from Madras,” she said to a laughing audience, adding, “Shakuntala’s Letter was exhibited in 1876, here.”

“Colours are what led to the realism in his works. They gave them definition and precision,” she said. She also wrote about his preoccupation with colours in the book, which discusses ‘hidden oranges in the teakwood’ and ‘transparent blue of veins’ at length.

His sense of colours has always inspired the author. Rukmini had once come across a note in one of his paintings, which simply said the words ‘note: leaf’. It did not strike a chord immediately. But soon enough, she walked out to the garden to a moment of revelation. “A ray of sunlight hit a leaf revealing an array of colours : lemon yellow, blue, shades of green, violet, scarlet and so on. This is exactly what he meant.”

This formula of colours, she said, also lead her to paint a portrait of him, which she did after studying a number of his black and white photographs. “Nobody knew what his skin texture was. The more I looked at the pictures, the clearer it became. I was trying to use his own technique of actualisation to arrive at that texture.”

The artist and his subjects

For Rukmini, writing about the artist and his work did not seem very challenging. “It came naturally to me. It was almost as if Raja Ravi Varma was dictating the words to me,” she said. Her narrative style, too, agrees with this notion. While parts of her book are written in first person — as if by the painter himself — the rest follows the perspective of the author.

Raja Ravi Varma’s subjects have often been as representative of the country and its culture, making him a seminal figure in the Indian art movement of the times. According to Rukmini, “His subjects gave an identity to India. He portrayed people from different walks of life, caste and creed no bar.”

Through the book, she has also dwelt on the artist’s less-discussed role as a patriot, who expressed through his works. “The feeling of swadesh was imbibed through his paintings. By and large, during colonisation, India did not have a collective identity. Ravi Varma definitely redefined it,” said Rukmini.

As relatives and admirers flocked around her, she concluded by saying, “Ever since the ‘leaf’ incident, I have started observing more, and realizing that every colour in the cosmos is reflected in everyone I meet. But certain colours will stand out, and that forms the figure.”